Point Loma is historically important as the site 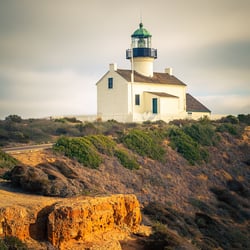 of the first European landing, now an upscale yachting community with local attractions Harbor Island and Shelter Island. Research real estate market trends and find Point Loma houses for sale.  Search for new homes, open houses, recently sold homes, and recent price reductions in Point Loma San Diego. To change how the search is displayed, click the gray button next to "Sort" to display houses in Point Loma by price, number of bedrooms, or days on the market.

If you would like more details on any of these Point Loma listings, just click the "Ask A Question" button when viewing the details of the property. We can provide you with disclosures, past sales history, dates and prices of homes recently sold nearby, and more.  If you'd like to take a tour, click "Schedule A Showing."

You can also create and save a custom home search by clicking the starred "Save" button to register for a free account so that you can receive email alerts whenever new Point Loma houses come on the market.

Point Loma located just north of Downtown San Diego was the spot where the first Spanish explorers landed in California. It is also one of the only places in California where dinosaur fossils still exist. As for real estate-related trivia, Point Loma has the oldest home tour west of the Mississippi River. Our St. Nicholas Home Tour began in 1952 and is still going strong today. There are not typical beaches in Point Loma, but many spots for surfing & wading.

Liberty Station is the highlight of recreation on the peninsula. Here you will find restaurants, shopping, and places like Stone Brewing, and Slaters 50/50. What was once a Navy training facility is now the site of fun for the whole family. Shelter Island isn't actually an island, but a land formation created by dredging the marsh areas. Hotels on the island with views of downtown, June through September there are comedians and musicians perform on Shelter Island. The Kona Kai, Humphrey's by the Bay, a hotel, and resort that has concerts all summer, with big name artists, performing. The point of Point Loma is a national park Cabrillo National Monument, and where the best tide pools are on the ocean. The Day at the Docks Festival each April highlights Point Loma's sports fishing industry. The Parade of Lights, with brightly decorated boats, is another nod to the nautical.

Condos, townhomes, resort-style gated communities, mid-century modern to contemporary coastal architecture, panoramic ocean and mountain views are some of the highlights of living in Point Loma. Approximately nine distinct areas comprise the community of Point Loma, each with its own benefits. The common thread, however, is the breathtaking views from the vantage points. Whether it's the twinkling lights of downtown after the sun bids adieu or the boats docked in their marina slips, looking out the window is a visual treat. La Playa single-family homes are custom masterpieces so magnificent they are often the site of weddings and other festive occasions. Homeowners in La Playa enjoy their privacy in this gated community, with many homes allowing private access to the water. Condo and townhome owners also reap the benefits of living in La Playa, with spectacular views of downtown and all the boats along the marinas. Wooded Area is a neighborhood named such because of the many mature trees in the area, especially the Eucalyptus and evergreen trees. Noteworthy is the lack of sidewalks in this part of Point Loma. The lack of pedestrian walkways is more than made up for with the views of the bay. Sunset Cliffs neighborhood is on the west side, above the ocean bluffs, and known for the spectacular views of the Pacific. Homes in this portion of Point Loma range from bungalow style to lavish estates of several thousand square feet. San Diego Sports Arena and the SOMA concert venue are in the Midway neighborhood of Point Loma. One of the largest swap meets in California occurs every week in the parking lot of The Valley View Casino Center. Point Loma Heights homes offer remarkable views of the water, and sunsets. On a clear day, some views extend all the way to the Tijuana River estuary. Townhomes, condos, and lavish single-family homes are found in Point Loma Heights. Loma Portal homes are convenient to Liberty Station, the entertainment and dining portion of Point Loma. Views from homes in this section of Point Loma include the downtown San Diego skyline and the mountains. Roseville-Fleetridge is one of the oldest parts of Point Loma, named for Louis Rose, one of San Diego's pioneers. Here you will find the "alphabetical author" section of Point Loma, with streets named after famous authors. Addison Street is the beginning of this community.

Fleetridge Point Loma homes for sale you will find Fleetridge is a neighborhood in Point Loma east of Sunset Cliffs. There are original 1950's and 1960's bungalows and ranches, and brand new custom built contemporary and California Cape Cod single family homes some with panoramic bay and downtown San Diego views.

Loma Portal is a neighborhood of charming Craftsman, Tudor, and Spanish Colonial historic homes situated northwest of Rosecrans Street and northeast of Nimitz Boulevard in Point Loma. Bordered by Chatsworth Blvd, Plumosa Park is a neighborhood gathering spot and frequented by dog walkers. A tradition since 1956, Plumosa Park and surrounding neighborhoods set out luminarias every Christmas Eve.

The oldest settled part of Point Loma is Roseville named after it's developer Louis Rose. Beginning in Roseville, streets running east-west make up the "alphabetical author streets" which continue into Loma Portal.

The Wooded Area in Point Loma has a countryside feel with a large number of historic mansions amidst Eucalyptus, evergreen, and other mature vegetation.

Quickly Find Your Point Loma Home
Search Nearby Communities
This information is deemed reliable but not guaranteed. You should rely on this information only to decide whether or not to further investigate a particular property. BEFORE MAKING ANY OTHER DECISION, YOU SHOULD PERSONALLY INVESTIGATE THE FACTS (e.g. square footage and lot size) with the assistance of an appropriate professional. You may use this information only to identify properties you may be interested in investigating further.