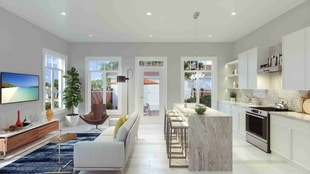 community and 3rd largest city in San Diego County famous for the Oceanside Harbor, palm lined Harbor Beach, and Oceanside Pier.  Research real estate market trends and find Oceanside homes for sale. Search for new homes, open houses, recently sold homes, and recent price reductions in Oceanside. To change how the search is displayed, click the gray button next to "Sort" to display houses in Oceanside by price, number of bedrooms, or days on the market.

If you would like more details on any of these Oceanside listings, just click the "Ask A Question" button when viewing the details of the property. We can provide you with disclosures, past sales history, dates and prices of homes recently sold nearby, and more. If you'd like to take a tour, click "Schedule A Showing."

You can also create and save a custom home search by clicking the starred "Save" button to register for a free account so that you can receive email alerts whenever new Oceanside houses come on the market.

Oceanside is 6 miles along the northern most strip of north county San Diego. Oceanside is the third largest city in San Diego County. The Marine Corps Base Camp Pendleton is located just north of Oceanside. The Oceanside Pier is the longest wooden pier on the western US Coastline. Ruby’s Diner is located at the end and most days you will see people fishing off the pier.

When searching Henie Hills Oceanside homes for sale you will find Henie Hills is a community located in the northeast corner of El Camino Real in Oceanside and by the 78 freeway and is surrounded by the El Camino Country Golf Course. This community was originally owned by Olympic ice skater and movie star, Sonja Henie and her brother, Leif. Sonja Henie and her brother, Leif purchased 1600 acres of the undeveloped land to host private retreats and entertain Hollywood friends. Many people gained interest in the land after the Henies built a custom home on the property. The Henies began selling parcels to developers and also developed some land into estate view homes. There are about 200 homes in Henie Hills in 5 different neighborhoods. It is a small, affordable community of single family homes. Most homes are located on about half acre lots, which provide a lot of privacy. The community also has its own pool, clubhouse, and tennis courts. Mira Costa College and Tri-City Hospital are next to the community and used to be part of the original land purchase by the Henies. Although there are no amenities within walking distance, shopping, restaurants, and services are within close proximity, including the Carlsbad mall, Carlsbad Village, and the freeway. Nearby parks include Palisades Park. Students living in Henie Hills attend schools in the Oceanside Unified School District. Schools include Palmquist Elementary, San Luis Rey Elementary, Martin Luther King, Jr. Middle School, and El Camino High School. Other options include Pacific View Charter School, Oceanside Adventist, and Montessori Arts and Sciences. When searching homes for sale in Jeffries Ranch Oceanside CA you will find Jeffries Ranch is an equestrian themed community in northeast Oceanside and was first developed by the Jeffries family, CW Jeffries. The community is filled with tree-lined streets with homes on large lots. It is located off the 76 freeway, so it provides quick access to Vista, downtown Oceanside, shopping, restaurants, and more. Although it is located off the freeway, there is only one major entrance in.

Jeffries Ranch is also located next to the Guajome Regional Park, which is a campground and park with miles of trails and ponds for enjoyment. Most homes in Jeffries Ranch are zoned for horses, and the community offers horse trails throughout. The original homes were built in three phases starting in the late 1970s. There are about 273 single-family homes and townhomes in Jeffries Ranch. Some single-family homes are estate ranch properties and most are on half an acre. Local events hosted by the Jeffries Ranch community include private social networking clubs and the Christmas Parade that also hosts a Toys for Tots Drive. Students living in Jeffries Ranch attend schools in the Oceanside and Vista school districts. Schools include Mission Meadows Elementary School, Roosevelt Middle School, and Vista High School.

Seaside in Oceanside is also known as the downtown district of the city. It is currently undergoing a major redevelopment program with new residential buildings, restaurants, and beach resorts. Seaside is considered the area bounded by Coast Highway, Seagaze Drive, and Oceanside Boulevard. It is one of the city’s oldest neighborhoods with many homes built in the 1920s. Homes have craftsman, Spanish, French eclectic, and Tudor architectural influences. Some homes are designated with plaques by the Oceanside Historical Society. Restaurants, shopping, and attractions in Seaside include the Oceanside pier, Wyndham Beach Resort, 333 Pacific, the Oceanside Surf Museum, and Oceanside Museum of Art. Local events include weekly sunset and farmers markets, Surfing America USA Championships, and the Independence Day Parade. Students living in Seaside attend schools within the Oceanside Unified School District including Kelly Elementary, Lincoln Middle School, and Oceanside High School.

Arrowwood is an upscale master planned community located in northeast Oceanside and next to the main Camp Pendleton Entrance. It has some of the largest and most expensive homes in Oceanside. Arrowood is made up of single family homes in old and new neighborhoods including SeaCountry, Saybrook, TollBrothers at Arrowood, and The Greens that began development in the 1950s and 1960s.

Newer neighborhoods began construction in the 2000s. The community has an exclusive junior olympic size swimming pool, clubhouse, and barbecue areas. The community is known for being an anchor of the Arrowood Golf Course, an 18 hole 6721 yard championship course designed by Ted Robinson, Jr.. Parks in Arrowood include Hilltop Park, which has an activity center, pool, 10 acre open space for sports and activities, playground, picnic area, and barbecues. Other parks include Melba Bishop Park and Recreation Center and Libby Lake Park. Students living in Arrowhead attend schools in the Oceanside Unified School District including Libby Elementary, Roosevelt Middle School, and El Camino High School.

The Greens at Arrowood

The Greens at Arrowood is an intimate enclave of single family luxury residences developed by Toll Brothers surrounding the championship eighteen hole public Arrowood Golf Course developed by Toll Brothers. Amenities within the community include a junior Olympic-sized swimming pool, picnic barbecue area and beautiful, natural recreational spaces to explore. When searching Fire Mountain homes for sale Oceanside you will find Fire Mountain is a desirable area of Oceanside and is located in southeast Oceanside. Originally, Fire Mountain was inhabited by the Luiseno tribe and was once a main agricultural center with citrus and avocado groves and family farms. It was formally annexed into the city of Oceanside in the 1960s and was known as north Carlsbad prior to that.

Woodlands Estates is a northeast community in Oceanside situated near Jeffries Ranch. Homes are large, upscale estate homes with oversized lots. Most of the homes were built in the mid 1990s and has no association fees. The community has horse trails for residents. Woodland Estates is within close proximity to all of Oceanside and is situated close to the 76 freeway. Residents have nearby shopping, restaurants, and parks. Nearby parks include the Guajome Regional Park. Students living in Woodland Estates attend schools in the Oceanside and Vista school districts. Schools include Mission Meadows Elementary, Roosevelt Middle School, and Vista High School.

Wilmont Ranch is a community in northeast Oceanside and is next to the Arrowood community and Camp Pendleton main entrance. It was first built in 2000 and is composed of a mix of modest and large estate homes. Homes are built on large lots with big front and back yards. Homes have craftsman, bungalow, and modern style architectural influences. Nearby parks in include Hilltop Park, which has an activity center, pool, 10 acre open space for sports and activities, playground, picnic area, and barbecues. Other parks include Melba Bishop Park and Recreation Center and Libby Lake Park. Wilmont Ranch is also within close proximity to the Arrowood Golf Course, restaurants, and shopping. Because it is close to the 76 freeway, residents have easy access to beaches, and nearby Carlsbad and downtown Oceanside. Students living in Wilmont Ranch attend schools in the Oceanside school district. Schools include Del Rio Elementary, Libby Elementary, Cesar Chavez Middle School, and Mission Vista High School.

Thunderbird Estate Homes are the best new home value in Coastal North County. There are seven semi custom homes on large lots with two floor plans. The Staten is 2,308 square feet with four bedrooms. The DePalma is 2,418 square feet with a study. Both floor plans have air conditioning and first floor master suites.

Morrow Hills Oceanside is located east of the Arrowood Country Club, north of the San Luis Rey River, and just west of Bonsall.

Marisol at Ocean Ranch is a new community by Meritage Homes in Oceanside near the Old Mission San Luis Rey off the 76 freeway and Melrose Avenue. The homes are built on large lots and have large front and back yards. All the street names have horse themes such as Spanish Horse, Saddlebred, Lipizzaner, and Chincoteague. There are a total of 5 cul de sacs and 93 homes in this small community. All homes have noteworthy exteriors, spacious kitchens, and beautiful master suites. Homes have energy efficient appliances, Smart System irrigation, concrete tile roofs, granite countertops, carpet, and ceramic tile. Homes are of Spanish colonial, craftsman bungalow, and California ranch architectural influences. Some homes have views of the San Luis Rey River. Students living in this community attend schools in the Oceanside and Vista school districts, such as Mission Meadows Elementary, Roosevelt Middle School, and Vista High School.

Quickly Find Your Oceanside Home
Search Nearby Communities
This information is deemed reliable but not guaranteed. You should rely on this information only to decide whether or not to further investigate a particular property. BEFORE MAKING ANY OTHER DECISION, YOU SHOULD PERSONALLY INVESTIGATE THE FACTS (e.g. square footage and lot size) with the assistance of an appropriate professional. You may use this information only to identify properties you may be interested in investigating further.