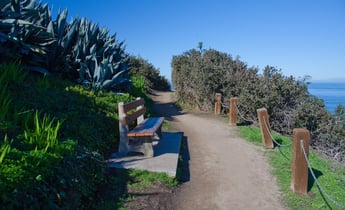 known worldwide for natural beauty and a resort atmosphere with stacked hillside homes overlooking the ocean. Research La Jolla real estate market trends and find La Jolla homes for sale.  Search for new homes, open houses, recently sold homes, and recent price reductions in La Jolla. To change how the search is displayed, click the gray button next to "Sort" to display houses in La Jolla by price, number of bedrooms, or days on the market.

If you would like more details on any of these La Jolla listings, just click the "Ask A Question" button when viewing the details of the property. We can provide you with disclosures, past sales history, dates and prices of homes recently sold nearby, and more.  If you'd like to take a tour, click "Schedule A Showing."

You can also create and save a custom home search by clicking the starred "Save" button to register for a free account so that you can receive email alerts whenever new La Jolla houses come on the market.

The seaside community of La Jolla is nestled along a curve of the Southern California coastline. With 7 miles of white sandy beaches, residents of La Jolla are in a perfect position to enjoy all the perks of oceanfront living. La Jolla’s coastline includes a mixture of rocky shores and sandy beaches. The rocky shores are popular with photographers – the steady stream of waves crashing into the natural rock formations is the perfect backdrop for a photo.

La Jolla has a population of just over 40,000 residents. This mid sized community is home to a diverse population that includes residents of all ages and all walks of life. La Jolla is situated between Pacific Beach and Del Mar, two other coastal communities known for their upscale living and luxurious homes and condos. La Jolla’s towering hills and cliffs are covered with winding roads lined with upscale homes. These ocean view hills offer La Jolla’s wealthier residents the opportunity to look out over the Pacific Ocean from their own front porch.

Torrey Pines Golf Course is best known for the Farmers Insurance Open. This PGA Tour event was formerly known as the Buick Invitational and it has attracted top players to the area for years. The golf course is owned and operated by the city of San Diego. This public course boasts 36 challenging holes, some of which overlook the nearby Pacific Ocean and its rocky beaches. This golf course is as beautiful as it is challenging, making it a must play course for any golf enthusiast in the area. As a whole, the residents of La Jolla are very involved in their community.

Various aspects of day-to-day life are overseen by the La Jolla Community Planning Association —a group that is responsible for the management of several other government agencies like the city council, the City Planning Department, and the Planning Commission. Another prominent government group is the La Jolla Town Council, a nonprofit organization that is made up of residents and business owners who want their voices to be heard. La Jolla also includes neighborhood centered groups such as the Bird Rock Community Council and the La Jolla Shores Association as well as service clubs like the Social Service League of La Jolla and La Jolla Woman’s Club. If you are interested in living in an upscale neighborhood filled with opportunities to get involved in your community, the seaside gem of La Jolla might be the right choice for you.

The median list price for homes in La Jolla, CA is just over $2.1 million. When the properties in La Jolla were compared to similar homes in other parts of the United States, this price point was found to make La Jolla one of the most expensive, if not the most expensive, neighborhoods in the country. The properties here have a median list price of over $800 per square foot, a figure that is about $400 higher than the San Diego average. The real estate in La Jolla is surprisingly diverse, with the most expensive properties in La Jolla selling for more than 10 times the price of some of the other, smaller homes. In addition to the large, upscale estate style homes in La Jolla, the city also has several fantastic communities of luxury condos. These communities of condos and townhomes include neighborhoods that are made up of newly constructed properties as well as older, pre existing communities of condos and townhomes. One such community is in the Bird Rock district, a unique little area that includes a blend of shops, restaurants, and businesses. This neighborhood hosts frequent community events such as Halloween Window Painting, a 4th of July parade, and a Susan G. Komen Cancer Walk. Other popular neighborhoods include La Jolla Shores, the Village of La Jolla, La Jolla Village, the Upper Hermosa, and more.

Emerald Cove is located south of Crystal Bay, Emerald Cove is gated community of eighty Techbilt two story homes located along the southern slope of Mount Soledad. There are six floorplans within Emerald Cove, The Sea Star, The Triton, The Nautilus, The Dolphin, The Sea Horse and The Sand Dollar. West facing residences located on Caminito Bayo have ocean and bay views.

La Jolla Mesa is on the southern slope of Mount Soledad. Built in the 1960’s and 1970’s, homes in the La Jolla Mesa have views of the San Diego skyline, Coronado, Mission Bay, and white water surf.

Windemere is a beautiful gated community of one hundred forty six patio homes and one hundred fifty seven townhomes located at the peak of Mount Soledad. There is expansive green space with trails, two parks, a pond, and many other beautiful amenities in Windemere.

Soledad Corona Estates are located off of Soledad Road on a canyon rim with picturesque views of the ocean.

Quickly Find Your La Jolla Home
Search Nearby Communities
This information is deemed reliable but not guaranteed. You should rely on this information only to decide whether or not to further investigate a particular property. BEFORE MAKING ANY OTHER DECISION, YOU SHOULD PERSONALLY INVESTIGATE THE FACTS (e.g. square footage and lot size) with the assistance of an appropriate professional. You may use this information only to identify properties you may be interested in investigating further.