Located a mere 17 miles from downtown 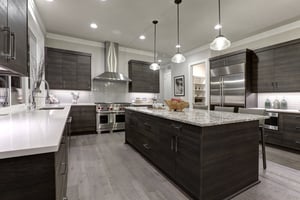 San Diego, El Cajon, California is a quiet little gem nestled within a mountain-girt valley east of the metropolis. Research real estate market trends and find homes for sale El Cajon.  Search for new El Cajon homes, open houses, recently sold homes, and recent price reductions in San Diego. To change how the search is displayed, click the gray button next to "Sort" to display houses in El Cajon by price, number of bedrooms, or days on the market.

If you would like more details on any of these El Cajon listings, just click the "Ask A Question" button when viewing the details of the property. We can provide you with disclosures, past sales history, dates and prices of homes recently sold nearby, and more.  If you'd like to take a tour, click "Schedule A Showing."

You can also create and save a custom home search by clicking the starred "Save" button to register for a free account so that you can receive email alerts whenever new El Cajon houses come on the market.

Are you looking to move within CA? Check out El Cajon in this guide and find out why it should be at the top of your list for places to live.

Deciding where to live in southern California can be a daunting task.

With its mild climate, sunny beaches, glittering cities, and wealth of cultural and tourist attractions, finding the best place to live in this part of California can seem a little overwhelming. But you might want to consider selecting El Cajon—one of the best-kept secrets in San Diego County.

Here are some reasons why you'll want to make El Cajon your top choice for places to live in southern California.

El Cajon: The City in the Valley

The city of El Cajon, CA is situated within a pleasant valley surrounded by picturesque foothills. Its peculiar name derives from the Spanish el cajón, "the drawer" or "the box," referring to the city's scenic valley location.

It was originally settled by Catholic missions that discovered the valley's rich pasturelands; incorporated in 1912, El Cajon quickly acquired a reputation as an agricultural town. It was particularly noted for the production of wine and table grapes as well as citrus fruits.

Today, beautiful El Cajon has a population of just over 100,000 inhabitants. Its weather is typically mild, somewhere between the Mediterranean climate of the coast and the arid inland conditions. But thanks to the ringing foothills, the valley tends to get plenty of rainfall.

Real estate values in El Cajon are among the highest in the nation. But compared to the other markets in southern California, El Cajon is nowhere near the most expensive.

If you're thinking of moving to El Cajon, you'll certainly not be lacking for things to do. With the eastern foothills so close, there's plenty of hiking and adventuring to be done.

Here's a look at a few of the attractions the city itself has to offer:

Southern California is noted for its entertainment venues, and El Cajon is no exception.

The Magnolia is a renowned concert hall with exceptional acoustics. Formerly the East County Performing Arts Center, it was recently renovated and renamed and is now one of the best theaters in southern California.

This little two-acre plot of heaven is a Certified Organic Garden. It features flower gardens, a citrus orchard, greenhouses, ornamental trees, and many more botanical delights in a therapeutic environment.

The Knox House Museum is located in a charming Victorian hotel built in 1876 amid the minor gold rush in the mountain town of Julian. The museum records the colorful nineteenth-century history of El Cajon, specializing in the wild decades just prior to the city's incorporation.

El Cajon is a thriving, beautiful city set amid the lovely and picturesque hills east of San Diego. If you'd like to live in El Cajon, California, contact us to see how we can help you find your next home.