Del Mar is a seaside destination famous for the Del Mar 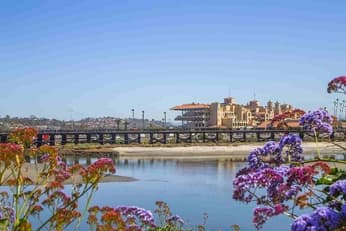 Thoroughbred Club "Where The Surf Meets The Turf." Luxury homes are along the beach colony, bluff, and hillside with ocean views.  Research real estate market trends and find homes for sale Del Mar CA. Search for new homes, open houses, recently sold homes, and recent price reductions in Del Mar. To change how the search is displayed, click the gray button next to "Sort" to display houses in Del Mar by price, number of bedrooms, or days on the market.

If you would like more details on any of these Del Mar listings, just click the "Ask A Question" button when viewing the details of the property. We can provide you with disclosures, past sales history, dates and prices of homes recently sold nearby, and more. If you'd like to take a tour, click "Schedule A Showing."

You can also create and save a custom home search by clicking the starred "Save" button to register for a free account so that you can receive email alerts whenever new Del Mar houses come on the market.

In 1885, Colonel Jacob Taylor purchased this area with plans to turn it into an upscale coastal resort town. He made this dream a reality when he opened the town’s first resort, Casa Del Mar, in 1886. The plans for this resort followed the expansion of the railroad line that connected Los Angeles and San Diego, a development that made the area far more accessible and put the town of Del Mar on the map.  During World War II, Del Mar was the site of a Naval Auxiliary Air Facility, a base of operations for the United States Navy that focused on the maintenance of blimps. Since then, this area has been primarily residential, with a focus on family friendly activities and upscale, beachfront living.

Today, this affluent community has a median household income of around $170,000. The town covers an area of 1.8 square miles and is home to just over 4,000 people. The children of Del Mar attend one of the eight K-8 schools in the Del Mar Union School District. They will then go on to attend high school in the San Dieguito Union High School District.

Del Mar’s Mediterranean subtropical climate attracts those that are looking for great weather year round. This type of climate is known for its warm, dry summers and its mild, wet winters. Del Mar’s average yearly temperature is around 65 °F, with an average summertime high of 85 °F and an average wintertime low of just over 40 °F. Del Mar’s southern border is formed by the Los Peñasquitos Lagoon, an area that was formerly known as The Soledad Lagoon. This lagoon’s present day name comes from the Spanish phrase meaning “The Little Cliffs.” The Los Peñasquitos Lagoon was originally a tidal estuary that has been used as a part of several water treatment plants. Today, the California Division of Parks and Recreation own the land. It has been designated as a State Preserve, meaning that only certain people and organizations are allowed to access this protected area. The state of California also owns the adjacent lands known as the Torrey Pines State Beach and the Torrey Pines State Reserve. Torrey Pines State Natural Reserve is a 2,000 acre park that is characterized by its iconic cliffs and plateaus that tower over Torrey Pines State Beach. This area is home a vibrant array of native plants and animals, including rabbits, bobcats, coyotes, cacti, and of course, the Torrey pine. This lagoon is also an important stop for several species of migratory seabirds, making it a popular destination for birdwatchers of all ages. Del Mar’s residents will enjoy attending the various events that are held throughout the year at the Del Mar Fairgrounds. Here, the Del Mar racetrack operates during the summer and fall. This arena can seat up to 44,000 spectators, making it the 2nd largest horse-racing arena on the west coast. It operates in conjunction with the Del Mar Fairgrounds, the Surfside Race Place, and the Del Mar Thoroughbred Club.

The median home value in Del Mar is just over $1.5 million, with the majority of the properties being upscale, stand alone single family homes. These houses typically have spacious yards with tall palm trees, attached garages, and plenty of windows and glass doors. The backyard pools and attached decks or spacious patios are perfect for enjoying the sunny, Southern California weather. Many of these homes also have stainless steel appliances, hardwood floors, and newly renovated bathrooms, making them a great choice if you are looking for a move in ready home in a top-notch location.

Las Vistas is a gated Del Mar community east of highway 5. The premier properties in Las Vistas have frontage on 12th green of the Lomas Santa Fe country club golf course. Las Vistas has a community pool and tennis courts.

Located just west of the 5, Point Del Mar is a Mediterranean gated community of ninety eight residences built in 1985 with three to four bedroom floor plans. There is a pool, spa, two lighted tennis courts, and basketball hoop.

Del Mar Polo Estates is privately gated and are located off of Via De La Valle and De La Valle Place.

Sandy Lane is a private gated enclave of primarily beachfront luxury homes at the north end of Del Mar adjacent to Del Mar North Beach. Aumann Bender & Associates represented the buyer on the most significant trade in 2014, 2938 Sandy Lane for $16,000,000.

Quickly Find Your Del Mar Home
Search Nearby Communities
This information is deemed reliable but not guaranteed. You should rely on this information only to decide whether or not to further investigate a particular property. BEFORE MAKING ANY OTHER DECISION, YOU SHOULD PERSONALLY INVESTIGATE THE FACTS (e.g. square footage and lot size) with the assistance of an appropriate professional. You may use this information only to identify properties you may be interested in investigating further.